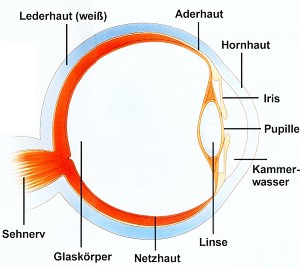 The eye works much like a camera which comprises an adjustable lens system, an aperture to accommodate different light settings, an image carrier (film), a shutter and the casing.

The human eye also has a lens system, consisting of a fixed front lens (cornea) and an adjustable lens (lens oculi).

The iris acts as an aperture. The retina is the image carrier, the sclera the casing, and the choroidea provides the supply arteries.

The eyeball (bulbus oculi) is made up of three layers. The outer layer, the tunica fibrosa, is sectioned into the sclera and the cornea. The choroid coat, ciliary body and iris form the middle layer, the tunica vasculosa. And the retina is the inner layer.

The sclera is the opaque, fibrous, protective outer layer of the eye. It maintains the shape of the globe and offers resistance to internal and external forces. The three important parts of the sclera are 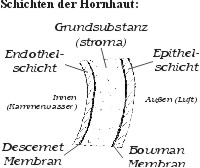 The cornea is the transparent front part of the eye. It rests on and is attached to the sclera. It is extremely sensitive to the touch (protective). Together with the lens, the cornea refracts light, accounting for approximately two-thirds of the eye’s total optical power.

It contributes most of the eye’s focusing power. The border area between the cornea and the sclera is called the corneal limbus.

The part of the eye which contains the most blood, the choroid coat has numerous vessels and arteries. It also harbours a vast supply of dark pigment deposits. The job of the choroid coat is to provide nourishment to the eye, to darken the intra-ocular sections against outside light and to continuously provide the retina with the fresh oxygen and nutrients without which vision would be impossible.

The iris is a circular disk in the middle of which the pupil is situated. The iris is responsible for controlling the diameter and size of the pupil and the amount of light reaching the retina. Pupillary response slows with age.

Lens (crystalline lens) nach obenThe eye’s lens is a fibrous substance which becomes denser towards its centre. It is inhomogeneous, with no nerve fibres or blood vessels. By changing shape, the lens adjusts the focal distance of the eye so that it can fix on objects at various distances, thus allowing a sharp real image of the object of interest to be formed on the retina. This adjustment of the lens is known as accommodation.

Vitreous humour is the gelatinous mass (98 per cent water) that fills the space between the lens and the retina. It contains no nerve fibres or blood vessels. Schlieren and turbidity in the vitreous humour can cause silhouettes to be created on the retina.

The retina is a clear, light-sensitive tissue lining the inner surface of the eye. It is made mostly of receptors: rods and cones. Both are sensory cells with hexagonal cross-sections. The rods and cones convert light to neural stimuli.

Cones are receptor cells in the retina of the eye that function best in relatively bright light. They enable us to perceive colours, shapes and movement.

Rods are receptor cells in the retina of the eye that can function in less intense light. They are almost entirely responsible for night vision and enable us to perceive rough (colourless) outlines and movements.